This page is intended as a resource. Click here to read about our bispecific antibody engineering service.

Bispecifics are a class of engineered antibody and antibody-like proteins that, in contrast to ‘regular’ monospecific antibodies, combine two or more different specific antigen binding elements in a single construct. Since bispecific antibodies do not typically occur in nature, they are constructed either chemically or biologically, using techniques such as cell fusion or recombinant DNA technologies. The ability to bind two different epitopes with a single molecule offers a number of potential advantages. One approach is to use the specificity of one arm as a targeting site for individual molecules, cellular markers or organisms, such as bacteria and viruses. The other arm functions as an effector site for the recruitment of effector cells or delivery of molecular payloads to the target, such as drugs, cytokines or toxins. Alternatively, bispecifics can be used to dual target, allowing detection or binding of a target cell type with much higher specificity than monospecific antibodies.

Over the past forty years a wide variety of multi-specific antibody formats, and techniques to produce them, have been developed. This is driven, in part, by the need to be able to efficiently produce and purify multi-specific antibodies for use in the clinic, as well as to modify their functional properties. We will break these formats down into 5 main areas and discuss each in turn. It must be noted though that this only covers a sub-section of the many varied bi, tri and tetra-specific antibody formats that have been developed in one of the key antibody growth areas of the last 20 years. 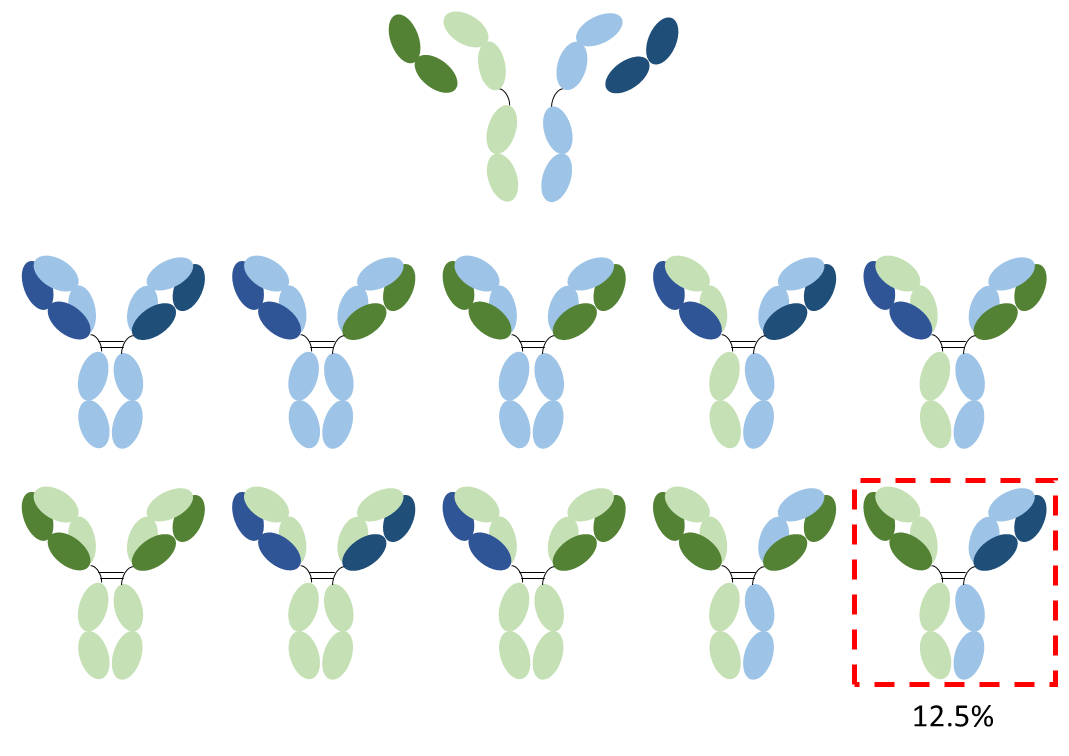 Figure 1. The chain association problem. Representation of the antibody combinations that can be produced by a quadroma cell line assuming random chain association. In total 16 formats are possible, of which six are identical. Six tetramers, including the desired bispecific antibody, occur twice (each with a yield of 12.5%) and four tetramers occur once (each with a yield of 6.25%).

In the last 20 years efforts have focused on recombinant DNA technology to enable engineering of antibody formats that minimize or completely avoid this chain association problem and the remainder of this section will focus on these.

When people refer to bispecific antibodies they are typically referring to heterodimeric antibodies, i.e. a traditional IgG molecule but with one arm targeting one antigen and the other are targeting a second antigen as shown in the figure below. These molecules are thus bispecific and monovalent. 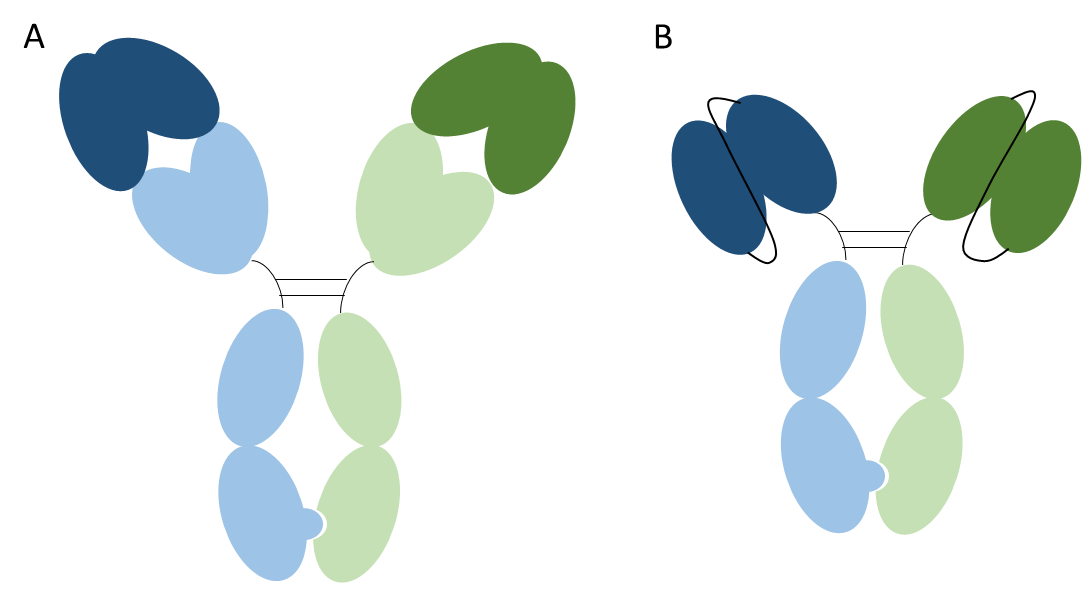 The first bispecific antibody of this kind was described by Genentech (4). They created a “knobs-into-holes” antibody (often abbreviated as KiH) whereby a large amino acid on one chain was replaced with a small amino acid (mutation Y407T) and on the second chain a small amino acid was replaced with a large (mutation T366Y). This resulted in preferential formation of heterodimer. Further mutations were later reported by this group to enhance heterodimer formation further (5).

Subsequent attempts to generate heterodimeric bispecific antibodies have followed a similar approach. Amgen have created heterodimers by altering the charge of the Fc domain interface, or as they call it electrostatic steering (6). EMD Sereno have created SEEDbodies consisting of alternating human IgA and IgG beta strand sequences to generate asymmetric but complementary domains (7).

These approaches and many similar ones suffer from two main problems: i) light chain shuffling; and ii) homodimer formation. The aforementioned approaches address the issue of heavy chain association but it is also essential to ensure correct light chain association. If this is not addressed the light chains can pair with either heavy chain resulting in a mixture of species. This can be resolved by using antibodies that have been developed to have a common light chain (8) but in most situations this option is not available. The most successful engineering approach to resolve this problem has come from Roche with the development of CrossMab (9). In this format the VH-VL or CH1-CL domains are exchanged by domain crossover between the heavy and light chain Fab domains, resulting in preferential heterodimer formation.

Alternatively, the light chain shuffling problem can be removed completely by switching to a scFv-Fc format (Figure 2B). However, all of these approaches to force heterodimer formation still result in a varying amount of homodimer being present, which must be removed during purification. The amount of the preferred heterodimer varies from approach to approach but some mutations are claimed to result in >95% heterodimer. However, to achieve this care must be taken on ensure comparable expression levels between the two different chains.

A completely unrelated approach has been developed by Genmab and is based on the occurrence of Fab-arm exchange in IgG4s (10, 11). In this so-called Duobody approach two homodimeric antibodies are expressed individually and purified. Under redox conditions the two antibodies are then mixed together and pair into a heterodimeric antibody. As the light chains are already correctly paired this removes the light chain shuffling problem and reported levels of heterodimer formation are high.

In an effort to avoid the main manufacturing issues associated with heterodimeric bispecific antibodies (i.e. light chain shuffling and homodimer formation) groups have looked into IgG fusions. The direct genetic coupling of the desired variable domains in these formats avoids production of alternative shuffled variants but results in a non-standard IgG molecule which itself may cause manufacturing problems such as reduced expression levels or increased aggregation tendency.

Abbott have developed the dual variable domain antibodies (DVD-Ig) (12) with a very similar independent approach also taken by Sanofi to generate tetravalent bispecific tandem immunoglobulins (TBTI). In these formats an IgG is elongated at its N-terminus on the corresponding heavy and light chains by an additional variable domain of a second antibody (Figure 3A). Thus the resulting IgG molecule is a heterotetramer composed of two heavy and two light chains, with the variable domains orientated in a tandem configuration.

Figure 3. Bispecific antibody fusions. Representations of a dual variable domain antibody (A), an IgG-scFv (B) and a scFv-Fc-scFv (C). In each format one pair of variable domains is shown in blue and the second pair in green. All formats shown are bispecific and bivalent.

Although numerous formats are currently in clinical development the only approved bispecific antibody fragment to date is blinatumomab (trade name Blincyto®) from Amgen. This is a bispecific T-cell engager or BiTE. BiTEs are constructed by genetic fusion of two single chain variable fragments (scFvs). Once scFv binds to CD3e on T-cells and the other binds to a surface molecule on the specific target cancer cells. Once bound to the target antigen on the cancer cell, binding of CD3 leads to activation and polyclonal expansion of cytotoxic T-cells ultimately resulting in lysis of tumour cells (18).

As one would expect, multi-specific antibodies can be generated by any combination of the numerous technologies previously described to generate tri, tetra and penta specific antibodies with varying valencies. MedImmune have reported the use of an IgG with back-to-back scFvs at the C-terminus (19). Equally a format consisting of scFvs fused at either end of the IgG could be easily imagined.

Another approach to generating multi-specific antibodies comes from Zyngenia, with their Zybody platform. This technology incorporates antigen binding peptides at some or all of the N and C-termini of antibody heavy and light chains, resulting in up to five specificities (20).

An ever advancing topic such as this is too large to cover in any single review. We highly recommend reading papers 13-17 in this list which cover many topics not on this resource page and also cover some of the areas described in this resource in more detail.