It was recognized in the 1960s that the two processes of IgG transport from mother to her young and the protection of IgG from catabolism were mediated by receptors that share many features (1). Originally these were referred to as the neonatal transport receptor (FcRn) and the IgG protection receptor (FcRp) respectively. It wasn’t until 1996 that it was conclusively shown that these were the same receptor (2-4). These have since been unified under the term Brambell receptor (FcRB) in honour of their discoverer, although the receptor is still more commonly referred to as FcRn. 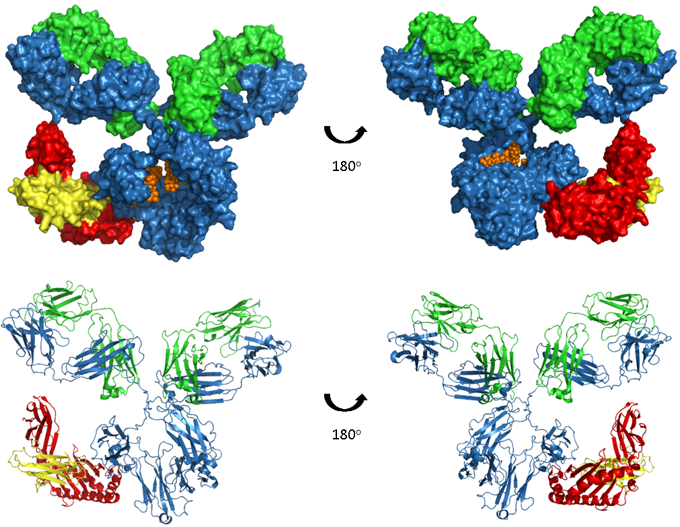 Figure. Human IgG1-FcRn complex.
A model of human IgG1 in complex with the FcRn-B2M heterodimer, which binds in the CH2 and CH3 regions of the antibody. The upper images show space-filled models and the lower images are ribbon representations. The antibody heavy and light chains are shown in blue and green respectively, glycosylation in orange, FcRn heavy chain in red and β2-microglobulin (B2M) in yellow. Model produced from PDB accession numbers 1IGY and 1I1A.

FcRn is a heterodimer of a β2-microglobulin (B2M) light chain and a major histocompatibility complex (MHC) class I-like heavy chain. As shown in the image above, FcRn binds IgG at the interface between the CH2 and CH3. Critically the binding site contains a number of histidine residues which results in a pH dependent binding that is crucial to its function (5, 6). Endocytosis of IgG is followed by binding of IgG to FcRn in the acidic environment (pH 6.0) of the endosome. The IgG-FcRn complex is then trafficked through cellular conduits to bypass lysosomal degradation and finally IgG is released back into the serum at physiological pH. This cycle is depicted in the image below. FcRn-mediated recycling results in IgG1, 2 and 4 having the longest serum half-life of all proteins, at approximately 21 days. Although IgG3 binds FcRn recycling of this sub-class is less efficient due to a single amino acid change at the binding site (7), resulting in a half-life of only 7 days. 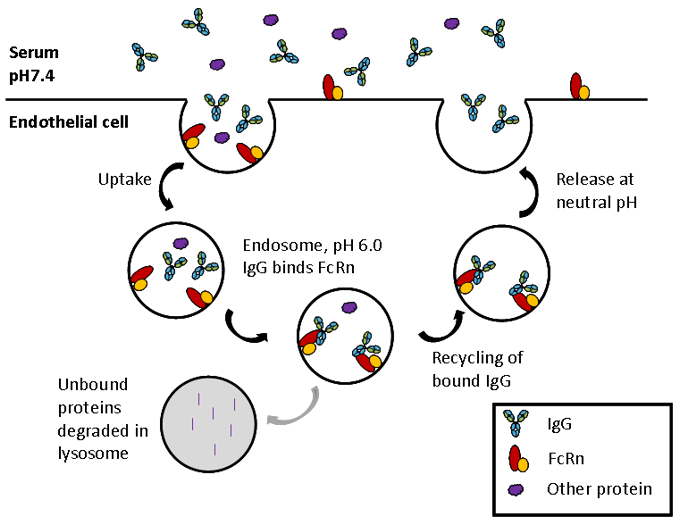 Figure. FcRn mediated recycling.
In the early endosome IgG interacts with FcRn at pH 6.0. The FcRn-IgG complex is then recycled back to the cell surface and IgG released at neutral pH thus rescuing IgG from lysosomal degradation.

Protein A and G

Although not a function of antibodies per se, two bacterial proteins, Protein A and Protein G, bind to the Fc region of some antibodies. Protein A is a 56 kDa surface protein originally found in the cell wall of Staphylococcus aureus and Protein G is a 65 kDa protein from Streptococcal bacteria. In a similar manner to FcRn, protein A and G bind at the interface between the CH2 and CH3 domains, as depicted in the image below. Although overlapping the three epitopes are distinct and this results in differential binding of Protein A and G to different isotypes, subtypes and species of immunoglobulin, shown in this summary table of binding affinities. Due to their unique ability to bind pH dependently with high affinity to IgG in particular, these proteins have become widely used for the purpose of purifying antibodies. 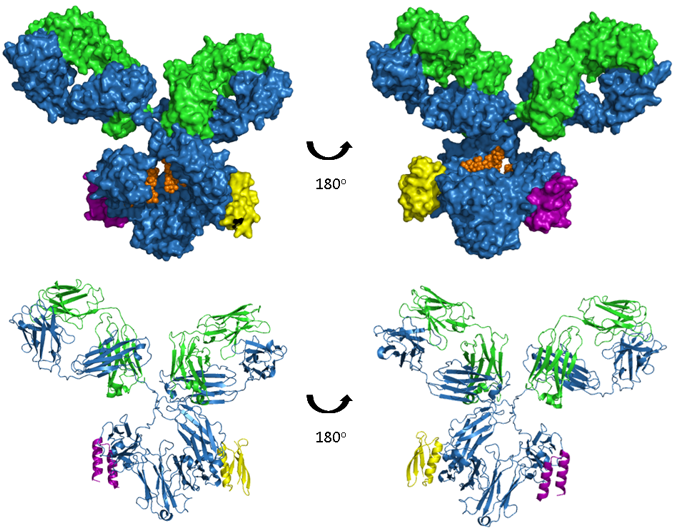 Figure. A model of human IgG1 in complex with both Protein A and Protein A.
The upper images show space-filled models and the lower images are ribbon representations. The antibody heavy and light chains are shown in blue and green respectively, glycosylation in orange, a Protein A fragment in purple and a Protein G fragment in yellow. Model produced from PDB accession numbers 1IGY, 1L6X and 1FCC.