CD25 is an interleukin-2 (IL-2) receptor present on various cells, such as activated T and B cells. It is also particularly prevalent on the surface of regulatory T cells (Tregs) and it has long been used as a major marker for this subgroup of lymphocytes. Scientific and pre-clinical interests concerning CD25 have mostly focused on two main aspects: receptor blocking, which leads to immunosuppression and might be useful in treating autoimmunity, and regulatory T cell depletion, to break through immune inhibition in the tumor microenvironment.

Absolute Antibody offers a wide range of anti-CD25 clones: blocking and non-blocking as well as depleting and non-depleting. Both anti-human and anti-mouse antibodies are available in different recombinant engineered formats to support various avenues of research and pre-clinical development.

The importance of CD25 (IL-2RA) in immunity is associated with its involvement in T cell activation and differentiation that drives the development of active immunity (Liao et al, 2013). These insights led to the generation of the anti-human (and monkey) CD25 therapeutic antibodies Daclizumab and Basiliximab, which are blocking antibodies that inhibit the IL-2 pathway and bring about partial immunosuppression. The former has been used to treat multiple sclerosis and the latter suppresses the immune system and inhibits the pathway activating the cellular immune response to allograft rejection. IL-2 signaling suppression can additionally prevent acute graft-versus-host disease, autoimmune disorders and malignancies such as T cell leukemias (Binder et al, 2007).

Other anti-human CD25-blocking antibodies in our reagents catalog include YTH 906.9HL (Campath-6), AHT54 and AHT107. We also offer a non-IL-2R blocking anti-human CD25 clone (7G7/B6) for research into IL-2-blockade independent effects of anti-CD25 therapy. It has been shown to delay tumor progression and prolong survival in humanized mouse models of adult T-cell leukemia. (Phillips et al, 2000).

Anti-mouse CD25 blocking antibodies can be used to elucidate the complex consequences of blocking the IL-2 pathway and Treg depletion in this crucial model organism. For example, the PC-61.5.3 clone was used for systemic Treg depletion in combination with local anti-CTLA-4 antibody production, showing that it could enhance anti-tumor immune responses (Tuve et al, 2007). The clone was originally a rat IgG1 with low depleting function and immunogenic potential, but Absolute Antibody used recombinant antibody engineering to reformat it into a variety of novel versions, such as mouse IgG2a for strong depletion, mouse IgG2a Fc Silent™ for blocking without any direct depletion of the target cells, and non-human primate antibodies for preclinical research. 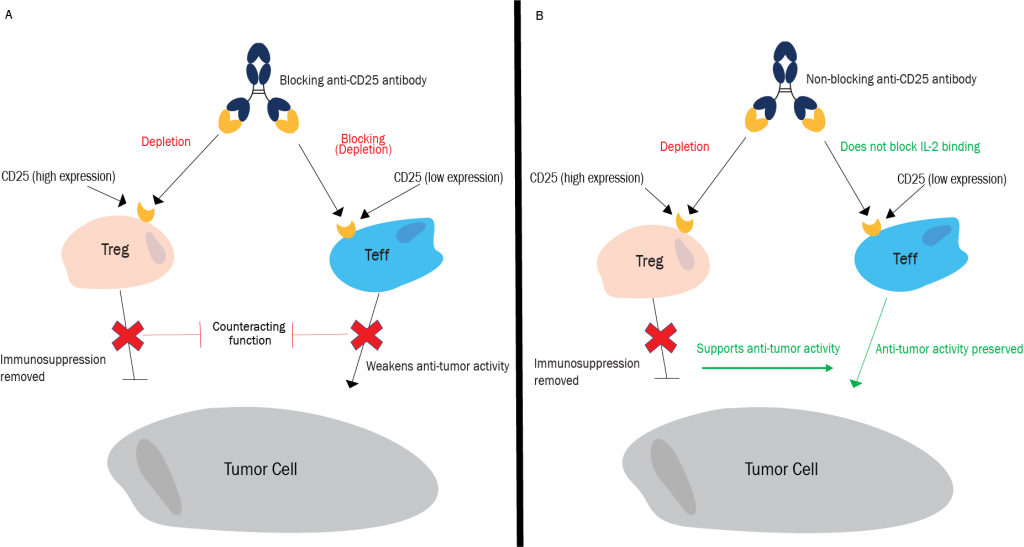 CD25 antibodies are used to explore the IL-2 pathway and its effect on regulatory T cells (Treg) and effector T cells (Teff) in cancer research. A) The antibodies most widely used in human and mouse block CD25, which removes immunosuppression of tumor cells but also impairs the anti-tumor activity of effector T cells. B) Next-generation non-blocking CD25 antibodies remove the immunosuppression while also retaining IL-2 binding and anti-tumor activity.

Finally, to complete our extensive anti-IL-2 receptor catalog of antibodies, we offer two popular clones directed against IL-2R beta (CD122). The beta subunit is involved in receptor-mediated endocytosis and transduction of the mitogenic signals of IL-2. First, the anti-human IL-2RB Mik-beta 1 clone was shown to be a potent inhibitor of IL-2 binding to its beta receptor CD122 and demonstrated to be a potential therapeutic agent (Kreitman et al, 1992). Second, the murine anti-IL-2RB 5H4 clone can be used for both in vivo and in vitro analysis of the CD122 receptor in mice, thanks to various engineered versions available.

View the table below for a list of our available antibodies for CD25 research. As with all Absolute Antibody reagents, the antibodies have been recombinantly produced for ensured batch-to-batch reproducibility and engineered into new species, isotypes and subtypes to open up new experimental possibilities. Please contact us with any questions or to receive an order quote.