The avian influenza A virus subtype H5N1 is a public health threat with the potential to cause disastrous effects to agricultural poultry flocks as well as serious illness and death in humans. Understanding its ecology, pathology and transmission is crucial to prevent these risks.

Absolute Antibody is committed to helping research on influenza A virus subtype H5N1. Our catalog offers a wide range of antibodies with different antigen specificities, cross-reactivities, and applications to support our customers in finding the most suitable reagents for their research.

The natural reservoirs of influenza A virus are aquatic birds, in which the virus fully adapted to its host causing no signs of disease (Webster et al., 1992). The virus can be transmitted to domesticated birds, such as chickens and turkeys, through direct contact with infected waterfowl or infected poultry. In these hosts, the pathology of the disease can be extremely severe, especially with certain subtypes, such as H5N1, causing outbreaks of fowl plague. Further, this subtype has also been associated with human infections as monitored by the WHO. Currently, H5N1 subtype is not efficiently transmitted from person to person. However, because the virus undergoes continuous antigenic alterations it is possible that the strain becomes adapted to human horizontal transmission, causing a widespread outbreak of influenza infection (Thomas et al., 2007). 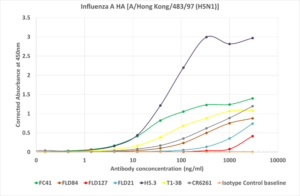 Further subtyping of influenza A viruses is based on the antigenic properties of the envelope surface proteins HA and NA. Currently eighteen known HA subtypes (H1 to H18) and eleven NA subtypes (N1 to N11) have been isolated (Nuñez et al., 2019). HA plays a crucial role during virus entry into the cell to initiate infection and is thus a determinant of host range. HA binds to the sialic acid on the surface of the host cells. After binding, the virus enters the cell through receptor-mediated endocytosis. The HA ectodomain is composed of two regions, a globular head region and a stem region. The globular head contains the receptor-binding cavity as well as most of the antigenic sites of the molecule and is subject to continuous antigenic drift, while the structure of the stem region is more conserved. NA catalyzes the cleavage of virus particles from the sialic acid sites on the host cell, thus facilitating the spreading of the virus within the host. Similarly to HA, NA is highly mutable and undergoes antigenic drift (de Jong et al., 2006). The globular heads of HA and NA are the major target of neutralizing antibodies, as inhibiting the virus binding to target cells and spreading would reduce viral infection and disease. 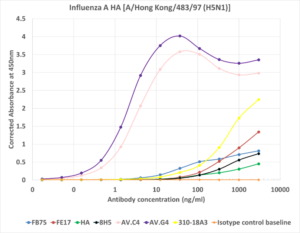 Figures 1 and 2 depict our ELISA data for the clones against Influenza A HA [A/Hong Kong/483/97 (H5N1)]. This study confirms the antibodies binding to the antigen and compares the respective affinity.

The antibodies in our catalog are available in different engineered formats, including rabbit and mouse formats for detection applications, co-labeling studies and animal model research; human IgG1 and IgM used in neutralization assays and as serological controls; scFv format with His-tags, for applications where antibody fragments are desirable and for site-specific functionalization; and human IgG1 and mouse IgG2b Fc Silent™ formats, which reduce binding of Fc receptors.

Please contact us if you would like to find out more about our anti-influenza A H5N1 subtype antibodies, their applications and the different formats.