Noroviruses rank among the top causes of foodborne disease, as estimated by the WHO, and globalization of the food industry might enable large outbreaks to occur on an international scale. Although the severity of disease is usually moderate in healthy individuals, infection can be associated with severe complications in immunocompromised individuals, elderly and young children (de Graaf et al., 2016; PMID: 27211790). Further, it is estimated that 200,000 people die each year from norovirus infections, primarily children in the developing world.

In order to provide our customers with the best tools to progress their norovirus research, Absolute Antibody offers a wide range of anti-norovirus antibodies (table below), which can be genotype-specific or have a broad recognition against various norovirus genogroups and genotypes. All the antibodies are produced recombinantly to ensure reproducibility and biological definition, and they are offered in rabbit IgG, human IgG1 and mouse IgG1 formats. 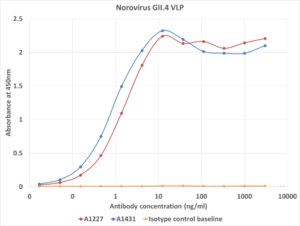 Norovirus, previously known as Norwalk virus, was discovered during an outbreak of gastroenteritis in Norwalk, Ohio, and was the first viral agent shown to cause gastroenteritis (Robilotti et al., 2015; PMID: 25567225). The virus is commonly spread by food-related transmission; it is highly infectious, as even a few particles can cause disease; and it can remain on surfaces even after common disinfecting procedures (Capece et al., 2022; PMID: 30020637).

Noroviruses are nonenveloped, positive-sense, single-stranded RNA viruses belonging to the Caliciviridae viral family. Noroviruses are divided based on the similarity of the amino acid sequence of the major capsid protein (Prasad et al., 1999; PMID: 10514371) into seven genogroups, which are further subdivided into at least 30 genotypes. Viruses from genogroups GI, GII and GIV are known to infect humans, while a specific strain from genogroup II, norovirus GII.4, is responsible for the majority of human outbreaks (de Graaf et al., 2016; PMID: 27211790).

Noroviruses are formed by capsid proteins organized in an icosahedral symmetry. The capsid protein is divided into a shell (S) domain, which forms the icosahedral shell, and a protruding (P) domain, pointing to the exterior of the capsid, which is made of P1 and P2 subdomains. The S domain represents the most conserved region of the sequence while the P domain has the largest sequence variation, particularly in the P2 subdomain (Prasad et al., 1999; PMID: 10514371). 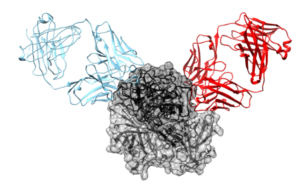 Clones A1431 and A1227 have been shown to bind to epitopes on the P domain monomer at a cleft between the P1 and P2 subdomains for clone A1431, and at the interface between the P domain and S domain for clone A1227 (Lindesmith et al., 2019; PMID: 31216462). Superimposition of the Norovirus P – A1227 and Norovirus P– A1431 structures shows that no steric hindrance would occur between the variable domains of the antibodies as a result of binding to the same P domain (Figure 2), making them candidates for the development of sandwich assays.

Please contact us if you have any questions about our products or to request an order quote. If you are studying other viruses or infectious diseases, be sure to check out our full collection of anti-virus antibodies.