Specificity: CTD 4H8 is known to be reactive with human and S. cerevisiae RNA polymerase II CTDs, however may also be cross-reactive with this protein in other species, including mouse, rat and chicken. The Ab is also reactive with both the phosphorylated and unphosphorylated form of the CTD YSPTSPS repeat. RNAPII is responsible for the transcription of most protein-coding genes in the human genome. The CTD of the enzyme, featuring these YSPTSPS repeats, is crucial for the regulation of the enzyme in a spatial (i.e. positionally along genes) and temporal (i.e. rate of RNA polymerisation) manner.

Antibody first published in: Kristjuhan et al. Transcriptional inhibition of genes with severe histone h3 hypoacetylation in the coding region Mol Cell. 2002 Oct;10(4):925-33 PMID:12419235
Note on publication: Describes a growing link between histone acetylation and gene expression using budding yeast. The mAb (CTD) 4H8 was used to immunoprecipitate hypo- and hyperphosphorylated RNAPII. The reactivity of CTD 4H8 for these forms of RNAPII was described by B. Winkler and J.Q.S, but the experiments which determined this, or the specific production of this mAb, remain unpublished.

Western Blot using anti-RNA polymerase II subunit B1 (RPB1) antibody CTD 4H8 (Ab00832) A431 (A), HeLa (B), and Jurkat (C) nuclear lysate samples (35µg protein in RIPA buffer) were resolved on a 10% SDS PAGE gel and blots probed with the chimeric mouse IgG1 version of CTD 4H8 (Ab00832-1.1) at 0.001 µg/ml before detection using an anti-mouse secondary antibody. A primary incubation of 1h was used and protein was detected by chemiluminescence. The predicted running size for RPB1 is 217.1 kDa. Ab00832-1.1 successfully detected RPB1 in A431, HeLa, and Jurkat nuclear lysate samples. 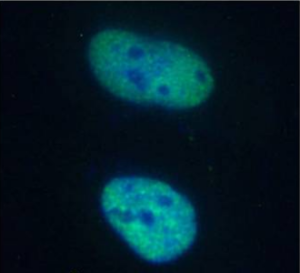 IF staining of HeLa cells using Ab00832-1.1. Click on image for more details. 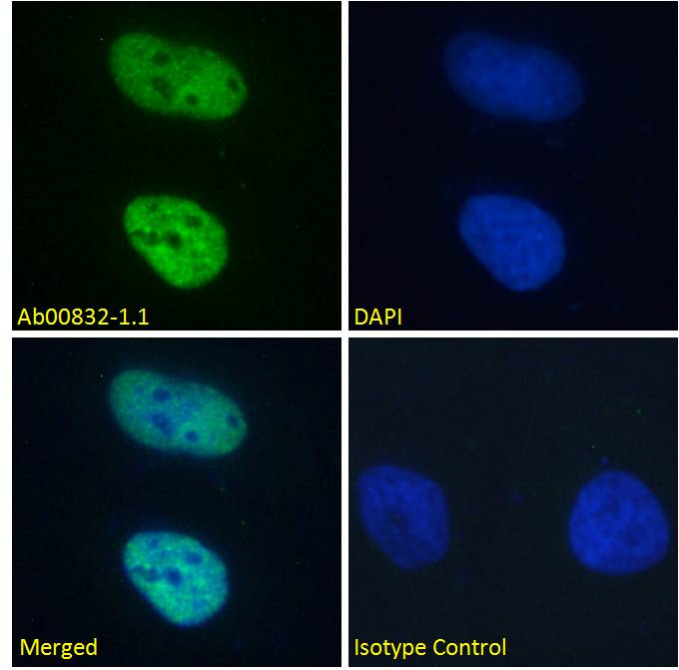