Application Notes: The antibody binds specifically to canine CD28, a self self surface receptor expressed by thymocytes and a subset of natural killer cells. CD28 acts as a receptor for CD80 and CD86, providing a costimulatory signal for the activation of T-cells and the production of interleukins, such as IL-6. The 1C6 monoclonal antibody has antagonistic activity, blocking mixed lymphocyte reactions and cytotoxic T lymphocyte mediated killing. The use of the monoclonal antibody 1C6 for the neutralisation of CD26 signal following T-cell receptor activation is of clinical importance for transplantation therapy, as it has been shown to prevent graft rejection and graft-versus-host disease in the canine model of allogeneic hematopoietic cell transplantation (HCT). 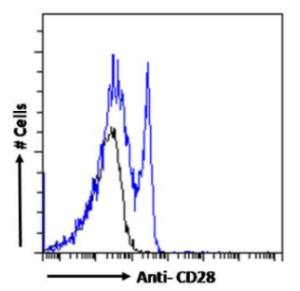 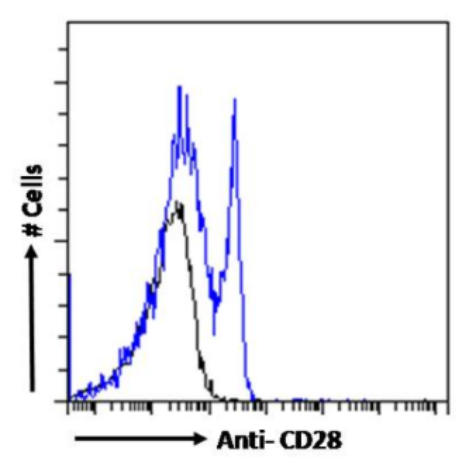 Flow-cytometry using the anti-CD28 antibody 1C6 (Ab00472) Dog peripheral blood leukocytes were stained with anti-Fluorescein IgG antibody (4-4-20; isotype control, black line) or the mouse IgG1 version of 1C6 (Ab00472-1.1, blue line) at a dilution of 1:100 for 1h at RT. After washing, bound antibody was detected using a goat anti-mouse IgG AlexaFluor® 488 antibody at a dilution of 1:1000 and cells analyzed using a FACSCanto flow-cytometer.