Specificity: This antibody shows high specificity and affinity for DNA/RNA hybrids and other A-form nucleic acid hybrids. It is useful in the detection of R-loops and does not cross-react with single-stranded DNA, double-stranded DNA and RNA, and ribosomal RNA. In the original publication by Boguslawski et al. (1986), this antibody was reported to bind the DNA-RNA heteropolymer and poly(I)-poly(dC) equally, but 100-fold higher levels of poly(A)-poly(dT) were required to achieve a similar degree of binding. DNA-RNA hybrids are a natural occurrence within eukaryotic cells and their level are high at sites of high transcriptional activity. They are non-canonical nucleic acid structures with transcriptional regulatory functions. Their presence is reported to predispose a locus to chromosomal breakage. A locus forming an DNA:RNA creates a double-stranded A/B intermediate conformation, with a second target for single-stranded nucleic acid binding proteins on the complementary, displaced DNA strand. They are shown to be resistant to the activity of DNA methyltransferases. The formation of DNA:RNA hybrids has been associated with a number of neurological diseases. Mutations in the DNA:RNA helicase senataxin (SETX) are implicated in the dominant juvenile form of amyotrophic lateral sclerosis type 4 and a recessive form of ataxia oculomotor apraxia type 2.

Antibody first published in: Boguslawski et al. Characterization of monoclonal antibody to DNA.RNA and its application to immunodetection of hybrids. J Immunol Methods. 1986 May 1;89(1):123-30. PMID:2422282
Note on publication: Describe the original generation of this antibody, its characterisation and its application to immunodetection of DNA-RNA heteropolymer hybrids. 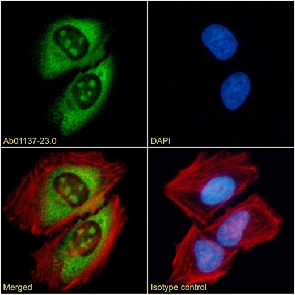