Specificity: AHT107 binds to a different epitope than IL-2. Suggested that determinant recognised by AHT107 is involved in formation of the high-affinity binding site of the p55 + p75 heterodimeric complex of the IL-2R in a way which does not disturb the interaction of the p55 molecule and IL-2, and that the high-affinity class of the IL-2R is responsible for mediating the growth signal at physiological concentrations of IL-2.

Application Notes: This antibody has been used to create a chimeric antibody with a murine variable region and human constant region through the use of recombinant DNA techniques. This gave antigen specificity of the mouse, and immunogenicity, serum half-life, and effector functions of human antibodies. The chimeric antibody has been found to have a greater anti-proliferative effect on T lymphocytes (Rose 1991). AHT107 has been used in ELISAs for the detection of soluble human IL-2R in response to different forms of helminthic and protozoal infections (O. Josimovic et al. 1988).

Antibody first published in: Osawa H et al. Studies on the formation of high-affinity IL-2 binding sites of an IL-2 receptor p55 + p75 heterodimeric complex: functional importance of a determinant on the p55 subunit defined by a monoclonal antibody AHT-107 Immunology Letters, 20 (1989) 205 - 212 Elsevie PMID:2469650
Note on publication: Describes the of binding monoclonal antibodies AHT107 and AHT54 to IL-2R and their inhibitory effect on IL-2 dependent proliferation of human T lymphoblasts. 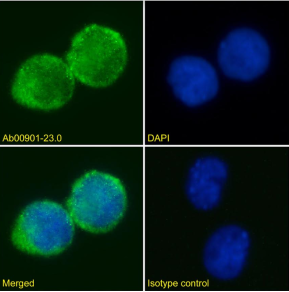 IF analysis of Jurkat cells using Ab00901-23.0. Click on image for more details. 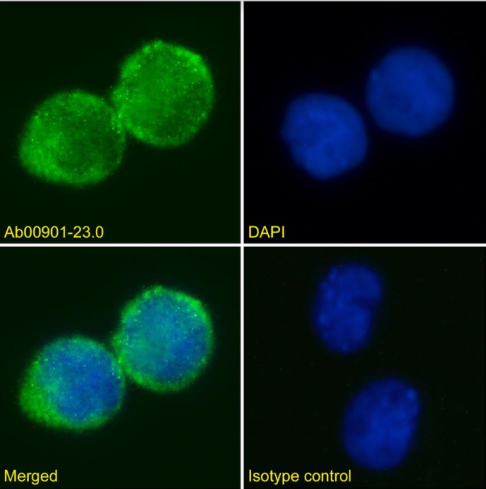