Specificity: Specific to the beta chain of the leukocyte integrin beta-2 family. This is found in LFA-1, Mac-1 and p150.95 among others. Binds an epitope distinct from the C3bi binding site. Has been shown to recognise both the human and Rhesus monkey antigen.

Application Notes: The main application 1B4 has been proposed for is its anti-inflammatory activity. It has been shown to work as a Fab fragment prepared by papain digestion (Wright et al, 1983). Its binding to antigen was confirmed by RIA (Van Voorhis et al, 1983). 1B4 has been shown to work in Rhesus monkeys, and has reduced immunogenicity once humanized. 1B4 is also compatible with immunofluorescence which has been used to demonstrate that the fine specificity of the combining sites was not altered by humanization (Singer et al, 1993). It has been shown to prevent polymorphonuclear (PMN)-dpepndent pathology in animal models of hemorrhagic shock, dermal inflammation, reperfusion injury, IBD and meningitis (Vedder et al, 1988, Vedder et al, 1990, Mileski et al, 1990, Carlos et al, 1990, Tuomanen et al, 1989, Arfors et al, 1987, Wallace et al, 1991, Wallace et al, 1992). The glycosylation patterns of 1B4 have also been studied in detail using NMR, ES-MS, HPAEC-PAD mapping and glycosyl composition analysis (Yu Ip et al, 1994).

Antibody first published in: Wright et al Identification of the C3bi receptor of human monocytes and macrophages by using monoclonal antibodies. Proc Natl Acad Sci U S A. 1983 Sep; 80(18): 5699–5703 PMID:6225125
Note on publication: Describes the generation of this IB4 and others, analysis of their binding by competitive binding experiments to identify different/common epitopes, immunoprecipitation and ELISAs to confirm a common antigen. 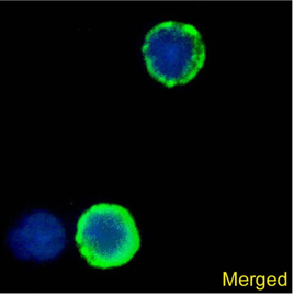 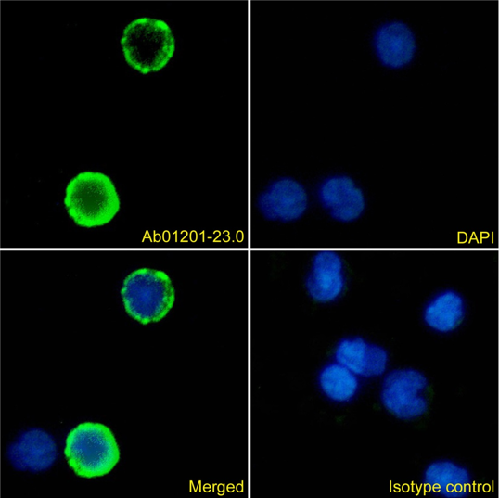 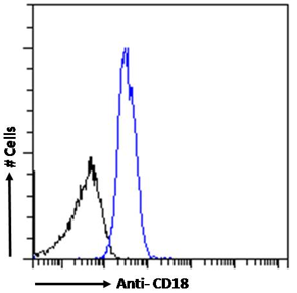 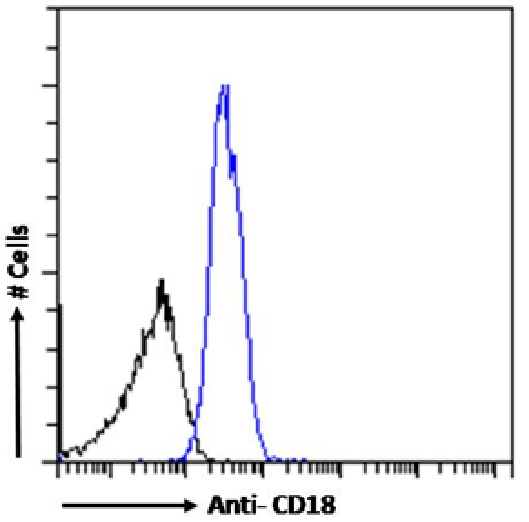 Flow-cytometry using the anti-CD18 antibody 1B4 (Ab01201). Human peripheral blood leukocytes were stained with anti-Fluorescein IgG antibody (4-4-20; isotype control, black line) or the rabbit IgG1 version of 1B4 (Ab01201-23.0, blue line) at a dilution of 1:100 for 1h at RT. After washing, bound antibody was detected using a goat anti-mouse IgG AlexaFluor® 488 antibody at a dilution of 1:1000 and cells analyzed using a FACSCanto flow-cytometer.