Specificity: HBJ127 binds to the CD98 heavy chain at an epitope consisting of residues AFS (aa 442-444) (Itoh et al, 2007). The antibody has not been shown to cross-react with other species. CD98 is expressed at high levels on monocytes and at very low level on peripheral blood T and B lymphocytes, splenocytes, NK cells and granulocytes. CD98 is a disulfide-linked and glycosylated type II integral membrane protein. This protein has roles in normal and neoplastic cell growth and is required for the function of light chain amino acid transporters. It is also involved in sodium-independent transport of large neitral amino acids and in guiding and targeting LAT1 and LAT2 to the plasma membrane. When associated with SLC7A6 or SLC7A7, CD98 acts as an arginine/glutamine exchanger.

Application Notes: HBJ127 can inhibit lymphocyte activation and proliferation in vitro (Yagita and Hashimoto, 1986), as well as inhibit the growth of human bladder tumors (Yagita, 1986). The antibody also mediates the inhibition of DNA synthesis of Con A-stimulated lymphocytes at concentrations greater than 13 μg/ml, the inhibition of mAB 6-1-13-induced c-src expression and the inhibition of mAb 6-1-13-induced polykaryocyte formation. In addition, HBJ127 can enhance expression of the mannose receptor on the surface of monocytes derived from healthy humans. HBJ127 shows positive staining of murine L929 cells transiently expressing human CD98 heavy chain in IF studies. The antibody can also be used to detect CD98 heavy chain by ELISA.

Antibody first published in: Yagita et al. Monoclonal antibodies that inhibit activation and proliferation of lymphocytes. I. Expression of the antigen on monocytes and activated lymphocytes. J Immunol. 1986 Mar 15;136(6):2055-61. PMID:3950410
Note on publication: Describes the in vtro effect of HBJ127 and other mAbs on lymphocyte activation and proliferation, and gave evidence to suggdst that the HBJ127 antigen was important in the activation of lymphocytes and its subsequent progression through the cell cycle. 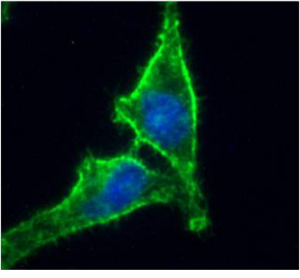 IF staining of HeLa cells using Ab00794-1.1. Click on image for more details. 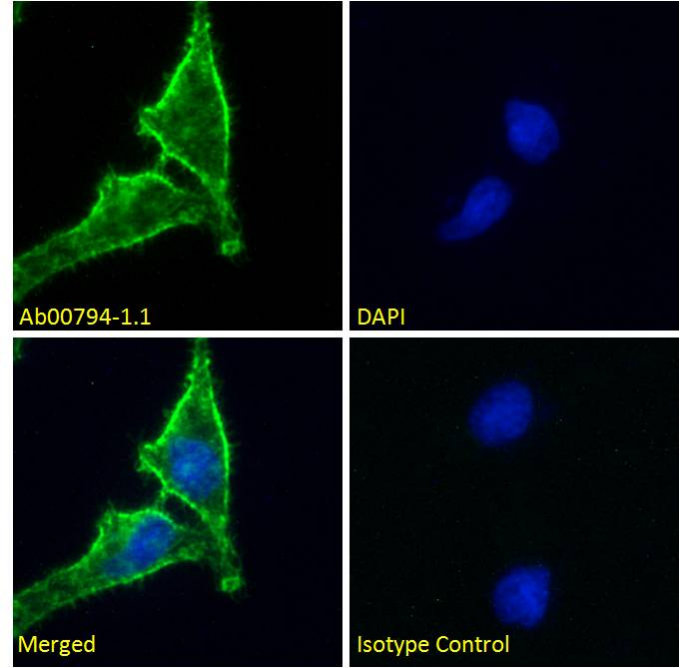