Specificity: mAY4 was shown to bind DR4 by ELISA (Sung et al, 2009). These experiments also showed that mAY4 did not react with other homologous death receptors, including DR5, decoy receptor (DcR) 1, DcR2, FAS receptor, and mTR (a mouse ortholog of human DR4 and DR5). SPR showed an affinity of 7.1 nM for interaction with DR4. mAY4 bound to a different epitope on DR4 than the physiological ligand TRAIL. DR4 is a pro-apoptotic receptor expressed on all cells. It represents a promising target for anti-cancer therapeutic agents.

Application Notes: mAY4 was shown to bind DR4, but not other related homologs, using ELISAs and SPR (Sung et al, 2009). The mAb and scFv-reformatted version were also used in cell viability assays for assessment of tumouricidal activity. More recently, the mAY4 CDRs were humanised and expressed as an scFv-reformatted antibody fragment (Lee et al, 2010), although the humanised version had a 10-fold lower affinity for DR4. 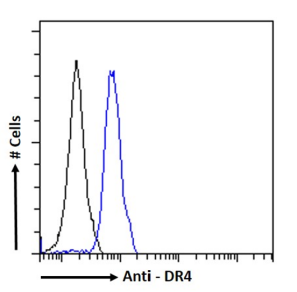 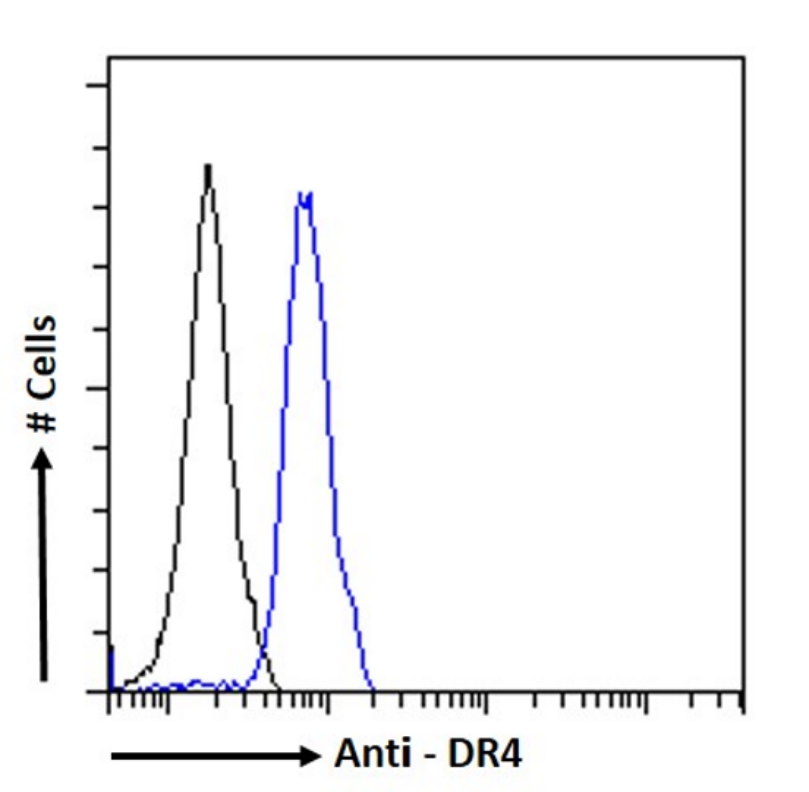 Flow cytometry using the Anti-DR4 antibody mAY4 (Ab00953). Paraformaldehyde fixed human peripheral blood monocytes permeabilized with 0.5% Triton were stained with anti-unknown specificity antibody (Ab00178-23.0; isotype control, black line) or the rabbit IgG version of mAY4 (Ab00953-23.0, blue line) at a dilution of 1:100 for 1h at RT. After washing, the bound antibody was detected using a goat anti-rabbit IgG AlexaFluor® 488 antibody at a dilution of 1:1000 and cells analyzed using a FACSCanto flow-cytometer.