Anti-TIGIT Antibodies and their Fc Dependency

TIGIT (T cell immunoreceptor with Ig and ITIM domains) is a prominent immune checkpoint inhibitor expressed on various lymphocytes, such as effector T cells, natural killer (NK) cells, and regulatory T cells (Treg) (Harjunpää and Guillerey, 2020). Many tumours have been shown to evade the immune system by expressing TIGIT’s ligands, and thus inhibiting an anti-cancer immune response (Chauvin and Zarour, 2020). In order to counteract this unwanted activity, different anti-TIGIT antibodies have been tested to disrupt the TIGIT pathway and prevent the occurrence of the deleterious immunosuppression in the tumour environment.

Considerable success has been achieved with antagonistic anti-TIGIT antibodies. Importantly, they were shown to work via different mechanisms, dependent on Fc-mediated effector function. These reported mechanisms of action include the restoration of T-cell effector function, depletion of Tregs, and depletion of tumour cells (Preillon et al., 2021).

For example, it was shown that the addition of an antagonistic anti-TIGIT antibody reverses immunosuppression of effector T cells in PBMCs from cytomegalovirus-positive donors (Preillon et al., 2021). Further, it was observed that TIGIT’s expression is particularly high on regulatory T cells. Various Fc formats of antagonistic anti-TIGIT antibodies were tested as potential ways to deplete this population of cells and remove one of the main agents responsible for the immunosuppression in the tumour microenvironment. The results demonstrated that among different tested formats (human IgG1, IgG2, IgG4) human IgG1 was able to engage FcγR (Fc gamma receptors) effectively and drive the killing of Tregs via ADCC (Preillon et al., 2021). Finally, in vivo studies in mouse cancer models CT26 and Hepa1–6 showed that anti-TIGIT antibodies had very strong antitumour activity and significantly slowed the tumour growth.

These experiments demonstrated the crucial role of the antibody’s isotype in this process. Mouse IgG2a isotypes (that effectively engages Fcγ receptors) were very effective anti-tumour agents whereas mouse IgG1 (reduced affinity for activating FcγR) did not exhibit such activity (Preillon et al., 2021).

Our engineering capabilities allow us to offer these clones in many formats, such as mouse IgG2a (to engage effector functions via the Fc receptors), mouse Fc silent (with silenced Fc fragment), rabbit IgG and even as part of a bispecific. Our mouse IgG1 format of 1B4 (Figure 1) is a part of our highly discounted VivopureX™ collection of high-purity, low-endotoxin recombinant mouse antibodies ideal for in vivo research in mouse models. Our VivopureX™ collection also includes other highly popular antibodies, including PD-1, OX40, CD25, CTLA-4, and more. 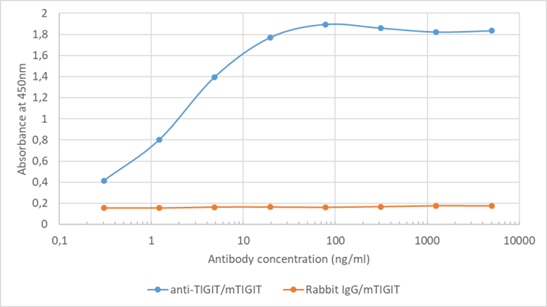