Home Our Technology Why Go Recombinant?

The vast majority of reagent monoclonal antibodies are generated from hybridomas, immortal antibody-producing cells created by fusing a tumor (myeloma) cell with an antibody-producing B cell from an immunized animal. However, hybridomas suffer from many limitations. They can undergo genetic drift, leading to batch-to-batch variability; they can be genetically unstable and stop expressing the antibody; and more than 30% of hybridomas contain additional antibody genes, meaning they are not actually monoclonal.

In contrast, recombinant antibodies are manufactured using synthetic genes expressed in a defined in vitro cell line. They offer a variety of benefits compared to traditional hybridoma-produced antibodies. 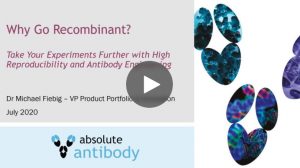