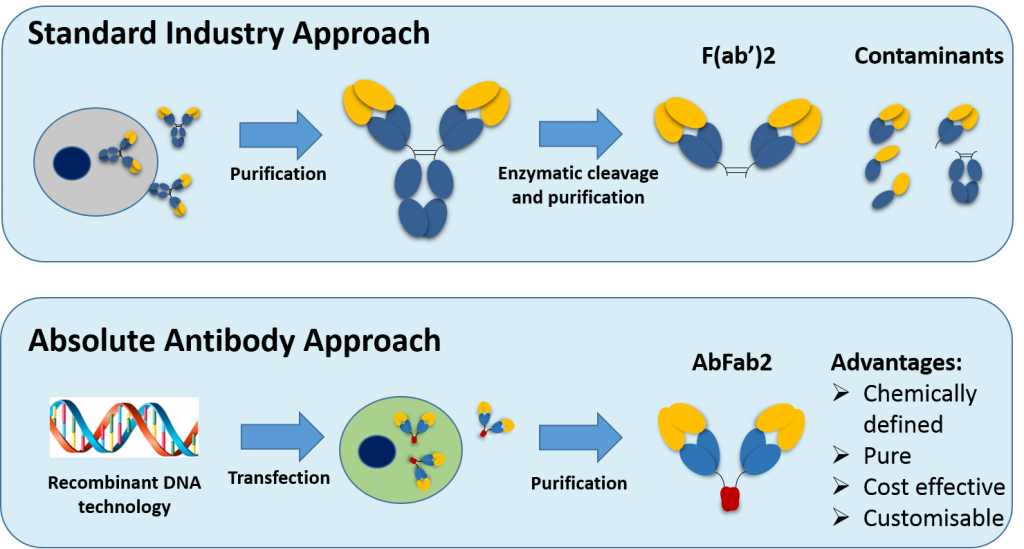 F(ab’)2 antibody fragments are used in many applications or assays where the presence of the Fc region may cause problems. They are traditionally made by enzymatic cleavage of full length antibodies.
AbFab2™ is Absolute Antibody’s recombinant version of a F(ab’)2.  It lacks the hinge-region but contains a small dimerization motif that improves stability and a his tag is added for purification.

Any of the antibodies in our catalog can be expressed as AbFab2s or you can use our custom service to get your own antibodies made in this format.

Competition ELISA comparing affinity of different anti-cmyc (9E10, Ab00100) variants: 1.25 μM solutions of murine IgG1 (green), murine AbFab2 (black) or human Fab (blue) 9E10 variants were pre-mixed with different concentrations of murine IgG1 9E10:HRP conjugate. These mixtures were then used to probe wells coated with immobilized multitag protein (Pr00106).The stronger the binding of the 9E10 variants the higher the concentration of 9E10:HRP conjugate had to be in order to observe a signal. The weakest binder was hFab, whilst AbFab2 and mIgG1 behaved almost identically.