This page is intended as a resource. Click here to read about our engineering services, including converting any antibody into a fragment.

There are a range of applications in which Fc mediated effects are not required and are even undesirable. A common solution for applications where the antibody is only being used to block a signalling molecule or receptor is the use of antibody fragments that lack the Fc domain (1). This also helps to reduce the other main failure of therapeutic antibodies, namely the lack of delivery, which is especially true for anti-cancer antibodies. Solid tumours have substantial physical barriers often preventing the penetration of antibodies to the centre and resulting in reduced therapeutic effects (2). The use of smaller fragments enables deeper penetration with the affinity of the antibody also being critical and if it is too high this will restrict its ability to penetrate a tumour (3). Fragments are also useful in imaging and cancer therapy, where a long serum half-life mediated by Fc interaction with the FcRn receptor results in poor contrast and in the case of radiolabelled antibodies fast clearance from the circulation via the kidney is also advantageous to reduce prolonged exposure (4). Antibody fragments that have been engineered to be multimeric are of use when targeting multiple disease associated antigens. This approach and others will be described in more detail in the bispecifics section. 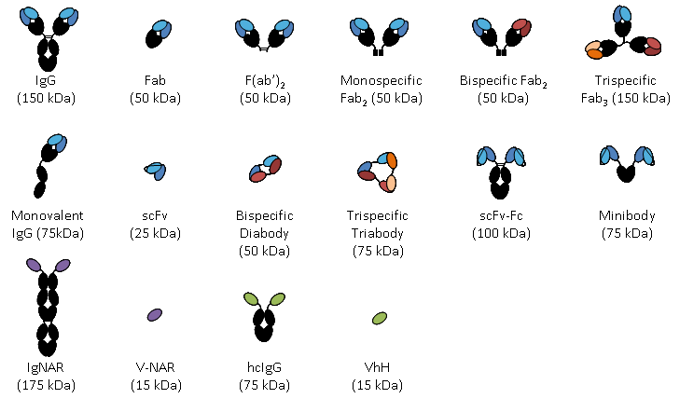 Over the past three decades antibodies have been dissected into smaller antigen binding fragments, initially by proteolysis and later by genetic engineering to produce mono or multivalent fragments. The image above shows a selection of the antibody fragments that have been engineered. These are mainly based on either Fab fragments or the single chain Fv (scFv) as building blocks. The Fv portion of an IgG, consisting of the VH and VL domains, is the smallest fragment that maintains the full binding capacity of the intact antibody. However, Fv domains tend to have limited stability due to the dissociation of the domains and thus a peptide linker was introduced between the VH and VL domains to create the scFv (5, 6). ScFvs naturally multimerize (7) and this can be controlled by linker length creating dimeric, trimer or tetrameric forms (8, 9). For this reason scFvs have become one of the main building blocks of antibody fragments.

When mouse single VH domains were shown to be functional (10) it was proposed that because of their small size they could potentially target cryptic epitopes that have evolved in many pathogenic viruses to contain narrow cavities that bind to target receptors but are poorly accessible to intact antibodies. However, they rarely retain the affinity of their parent antibody and are poorly soluble and prone to aggregation (10). Discovery of two types of organisms, the camelids and cartilaginous fish, that have evolved high affinity single variable domains (called the VhH domain in camelids (11) and the V-NAR domain in sharks (12)) mounted on an Fc equivalent constant domain framework resparked interest in this area. Both of these domains contain long CDR loops, often larger than those observed in conventional murine and human antibodies. Thus these are able to penetrate cavities in target antigens such as active sites (13) and canyons in viral and infectious disease biomarkers (14, 15) that may be inaccessible to the more planar binding associated with human or murine antibodies. At least two biotech companies have been founded on single domain antibody based technologies, Domantis (now part of GlaxoSmithKline) and Ablynx, with these molecules now starting to show promise in clinical trials (16).

To the best of our knowledge the smallest reported antibody fragment is a 3 kDa construct consisting of one CDR from the heavy chain and one from the light chain separated by a framework region (17). It was proposed that separation of two CDRs by a framework region would allow loops to assume conformation similar to that of the parental antibody. This was indeed shown to be true, although the constructs bound their antigen with only 1-10% of the affinity of the parent antibody as may have been expected given the reduced number of CDRs.

Despite the many advantages discussed above one of the main drawbacks of most antibody fragments for use as therapeutics is the lack of an Fc domain. This prevents FcRn-mediated recycling and thus infers a greatly reduced half-life, typically in the region of hours to days as opposed to weeks for a typical IgG. This has led to more recent efforts to either retain this natural property of IgG or reinstate it by further engineering. Examples of the former approach include the one-armed MetMAb developed by Genentech, which contains a heterodimeric Fc with only one Fab arm (18), or a monovalent IgG (also known as a half-antibody) developed in a number of different ways independently by Genmab (19), MedImmune (20), Pfizer (21) and the NIH (22). An example of the latter approach includes the use of engineered albumin binding domains fused to the antibody fragment to infer an albumin-like half-life (23)