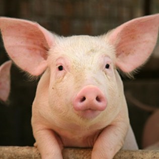 The Pirbright Institute, a world leader in the research and surveillance of livestock diseases and other zoonotic viruses, recently developed the first-ever pig antibodies against influenza. Shown to successfully protect against flu infections, the new antibodies can be used for model studies of human antibody therapeutics and vaccines.

The Pirbright team first generated the antibodies from influenza-infected pigs, after which Absolute Antibody recombinantly expressed 20 different clones for evaluation in serological assays. We then manufactured a top antibody candidate in bulk quantities for further research in vivo. All recombinant antibody production occurred in our proprietary transient expression system.

Pigs are large animal natural hosts for the same influenza virus subtypes that infect humans, and they are immunologically, physiologically and anatomically more similar to humans than smaller animals typically used in model research. Pigs are therefore a powerful model to study immunity to human influenza, as well as test vaccines and therapeutics. In addition, pigs can be a source of pandemic viruses; the 2009 H1N1 swine flu outbreak spread globally and killed thousands of people.

The new antibodies will aid further studies into the spread, prevention and treatment of influenza using pig models. To date, much of this research has been conducted with human antibodies that are immunogenic in pigs. Species-matched porcine antibodies will enable longer-term studies to be performed, as the anti-human antibody immune response is avoided. Moreover, the new pig antibodies recognize the same main hemagglutinin epitopes as their human antibody counterparts and demonstrate comparable neutralizing activity. These results, published in PLOS Pathogens, further indicate the value of the antibodies and using pigs as a model for influenza research.

The Pirbright team will continue to optimize the pig influenza antibodies, evaluate their therapeutic potential, and test for optimal delivery methods. Future avenues of research include exploring mucosal delivery, the effect of IgA and different IgG subclasses, and the role of Fc-mediated functions.

“Monoclonal antibody therapy is a highly effective intervention for respiratory infections,” said Dr. Elma Tchilian, Group Leader of Mucosal Immunology at The Pirbright Institute and senior author on the paper. “There is an urgent need to develop a realistic translational model for mAb selection and for evaluation of mAb delivery platforms prior to clinical trials.”

Absolute Antibody manufactured the pig influenza antibodies used in the new study using our transient expression system, which can produce recombinant antibodies in any species, isotype or format. We brought some prior experience expressing pig antibodies to the project, as well as extensive expertise with other livestock and veterinary species, including cats, dogs, ferrets and sheep.

We had also previously partnered with Pirbright researchers on other antibody expression projects. Most notably, we produced human influenza antibodies for a Journal of Immunology study published in 2020, which showed the human antibodies could neutralize H1N1 influenza in a pig model. The Absolute Antibody team manufactured the anti-influenza human clone 2-12C and the anti-fluorescein human IgG1 isotype control in bulk quantities for this project.

For more information, read the full text of the new paper or contact us with any questions.