Dog Antibodies for Research on Comparative Oncology and Infectious Disease

As the earliest animal to be domesticated, dogs have been offering their loyalty, security and companionship to their human partners for thousands of years. Recent studies have shown stronger similarities between the dog and human genomes, compared to the mouse genome. Dogs share more than 650 Mb of ancestral sequences in common with humans that are absent in mice. Thus, dogs are considered an important large animal model for studying human disease and cancer therapies. 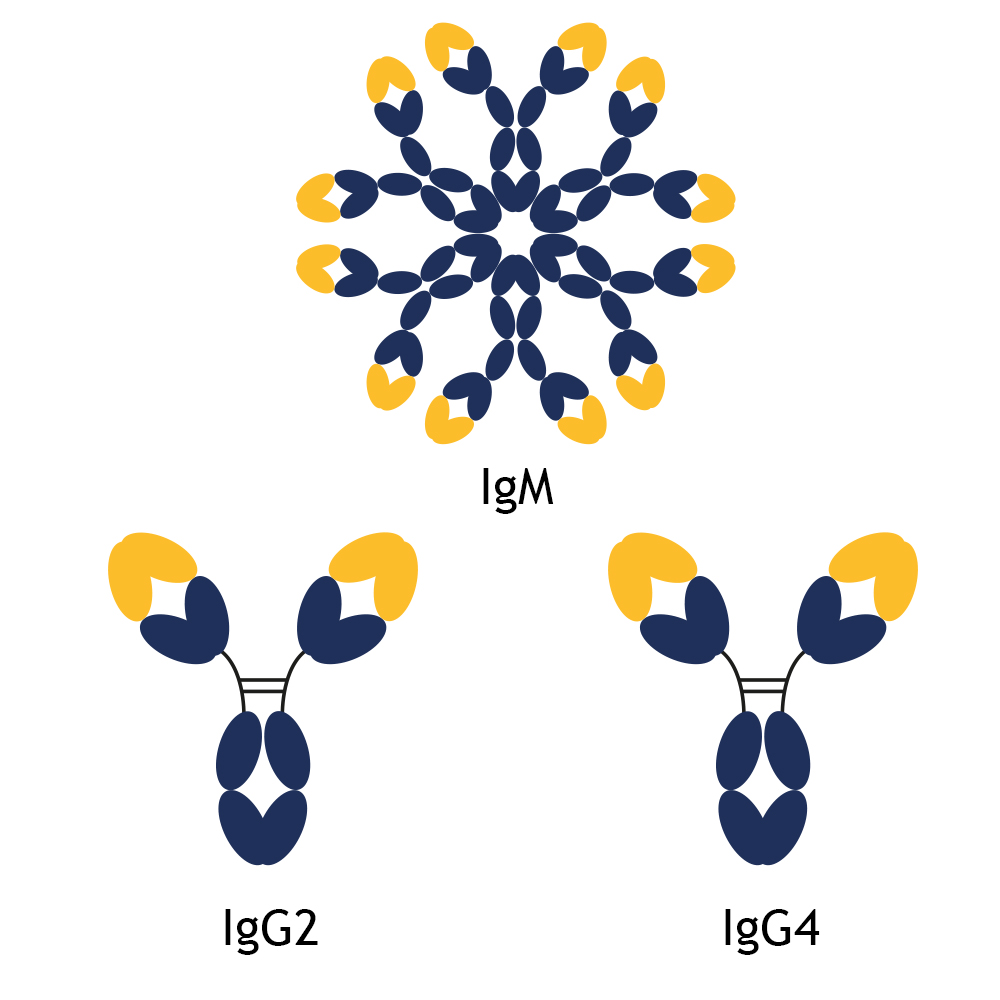 Absolute Antibody is excited to announce the launch of dog IgG2 (IgG-B) and dog IgG4 (IgG-D) isotype versions of many antibodies that can be used in oncology research in dogs or as in vitro serological controls for canine immune responses. These species-matched isotype versions induce low anti-species immune response in animal models, meaning the antibodies work for longer and the cohorts respond more consistently.

Cancer develops naturally in dogs within the environment they share with their human owners. Tumor initiation and progression are influenced by similar factors, including age, nutrition, sex, reproductive status and environmental exposures (Paoloni et al., 2007). Naturally occurring tumors in dogs have clinical and biological similarities to human cancers that are difficult to replicate in other animal model systems (Gordon et al., 2009).

High coverage dog genome sequencing (Lindblad-Toh et al., 2005) has enabled better understanding of the genetics of cancer and allows for comparisons between dogs and humans. The Veterinary Cancer Society estimates 1 in 4 dogs will develop cancer at some point, and almost 50% of dogs over age 10 will develop cancer. Dogs are the second in line after humans to receive healthcare benefits. Comparative oncology aims to utilize domestic dogs as a sophisticated model for the study cancer biology and therapy.

Antibodies targeting immunology and oncology targets are available in the Absolute Antibody catalog as canine IgG2, IgG2 Fc Silent™ and IgG4. For example, we offer the dog monoclonal antibody Mab231, the first therapeutic antibody to be approved for the treatment of canine lymphoma (Jeglum, 1996; Jeglum, 2009). Our anti-canine PD-1 [JC053] and PD-L1 [JC071] antibodies have potential to be explored as therapeutic agents by acting on the PD-1/PD-L1 signal-blockade pathway. The figures below show the flow cytometry analysis, IF staining and western blot for both the JC053 (Ab02247) and JC071 (Ab02248) clones.

Some studies have reported anti-dog CD20 antibodies to have potential in the treatment of canine lymphoma (Rue et al., 2015; Ito et al., 2015; Mizuno et al., 2020). Our anti-dog CD20 antibodies RF2 and NCD1.2 are appropriate candidates for such research. In addition, an anti-CD19 antibody like MB19-1 could help with research of canine B-cell biology and B-cell based malignancies. Antibodies targeting these proteins are widely used in humans, and these canine versions are offered in formats designed to help explore therapeutic applications in dogs.

Finally, our anti-canine ICOS [3F12] antibody and anti-canine CD28 [1C6] antibody have the ability to suppress mixed leukocyte reactions, which can be useful in the treatment of canine chronic graft-versus-host disease (GVHD) and prevent graft rejection.

Dogs are a major reservoir for zoonotic infections and can transmit several viral and bacterial diseases to humans. Zoonotic diseases can be transmitted to humans by infected saliva, aerosols, contaminated urine or feces, and direct contact with the dog. Dogs are a major animal reservoir for rabies virus, which is transmitted to humans through bites from infected animals (Ghasemzadeh et al., 2015). It is estimated that globally canine rabies causes approximately 59,000 human deaths annually (Hampson et al., 2015).

In addition, Lyme disease is a multisystemic disease in humans, dogs and other mammals caused by a spirochete bacteria Borrelia burgdorferi and transmitted by Ixodes ticks. Dogs harbor ticks which may be transferred to humans when they come in close contact with their pets. The bacteria are transferred into the blood stream of dogs and humans through tick bites. Typical symptoms in dogs include arthritis, arthralgia, heart block and renal lesions (Appel et al., 1993). Our canine versions of anti-Borrelia burgdorferi antibodies, which include canine IgG2, IgG4 and IgM, can be used as markers for recent exposure to the causative agent of Lyme disease.

If you wish to learn more on our dog antibodies and how we apply species and isotype switching to other clones, please feel free to contact us. In addition to canine antibodies, we offer a wide range of other species that may be of interest to veterinary researchers, including cat antibodies and ferret antibodies. We also specialize in converting any clone into any species upon request, either those in our recombinant antibody catalog or a customer’s own antibody with our custom antibody engineering services.

A few of the many Absolute Antibody & Kerafast company dogs!

Our sister company Kerafast offers a variety of canine cancer cell lines, including osteosarcoma, melanoma and hemangiosarcoma available from a variety of dog breeds, that may be useful for your research. These cell lines are provided by the Modiano lab at University of Minnesota, Twin Cities and are available in the Kerafast catalog for purchase.

Additionally, our parent company LSBio offers a variety of anti-dog antibodies for immunohistochemistry, including the anti-dog PD1 reactive clone UMAB198.

Below are all of our canine antibodies which are available in engineered isotypes. Contact us if you have any questions or to receive a quote.